Now that the current generation BMW M3 and M4 have been out for a few years, the high-performance variants are officially in full swing. Last year saw the M4 CSL be revealed, but this year BMW adds the 2024 M3 CS to the lineup.

“CS” stands for Competition Sport, and if you’re already familiar with the formula for BMW CS models, this one maintains the trend. The 3.0-liter twin-turbo inline-six engine is massaged to produce 543 horsepower now, a 40-horsepower boost over a regular M3 Competition. Torque output remains the same at 479 pound-feet. BMW says it found the extra power by increasing boost pressure from 24.7 psi to 30.5 psi. It also features model-specific changes to the engine management software.

BMW says the CS features specially-designed engine mounts for a more rigid connection between the engine and vehicle structure. As a result, throttle inputs and the transmission of torque to the drivetrain should be sharper. The CS will only be offered with all-wheel drive and an eight-speed automatic transmission, both of which are necessary to make it the quickest M3 variant with a 0-60 mph time of just 3.2 seconds. That’s 0.2 second quicker than a non-CS M3 Competition xDrive model. Top speed is 188 mph, making the CS faster on the top end by 8 mph. 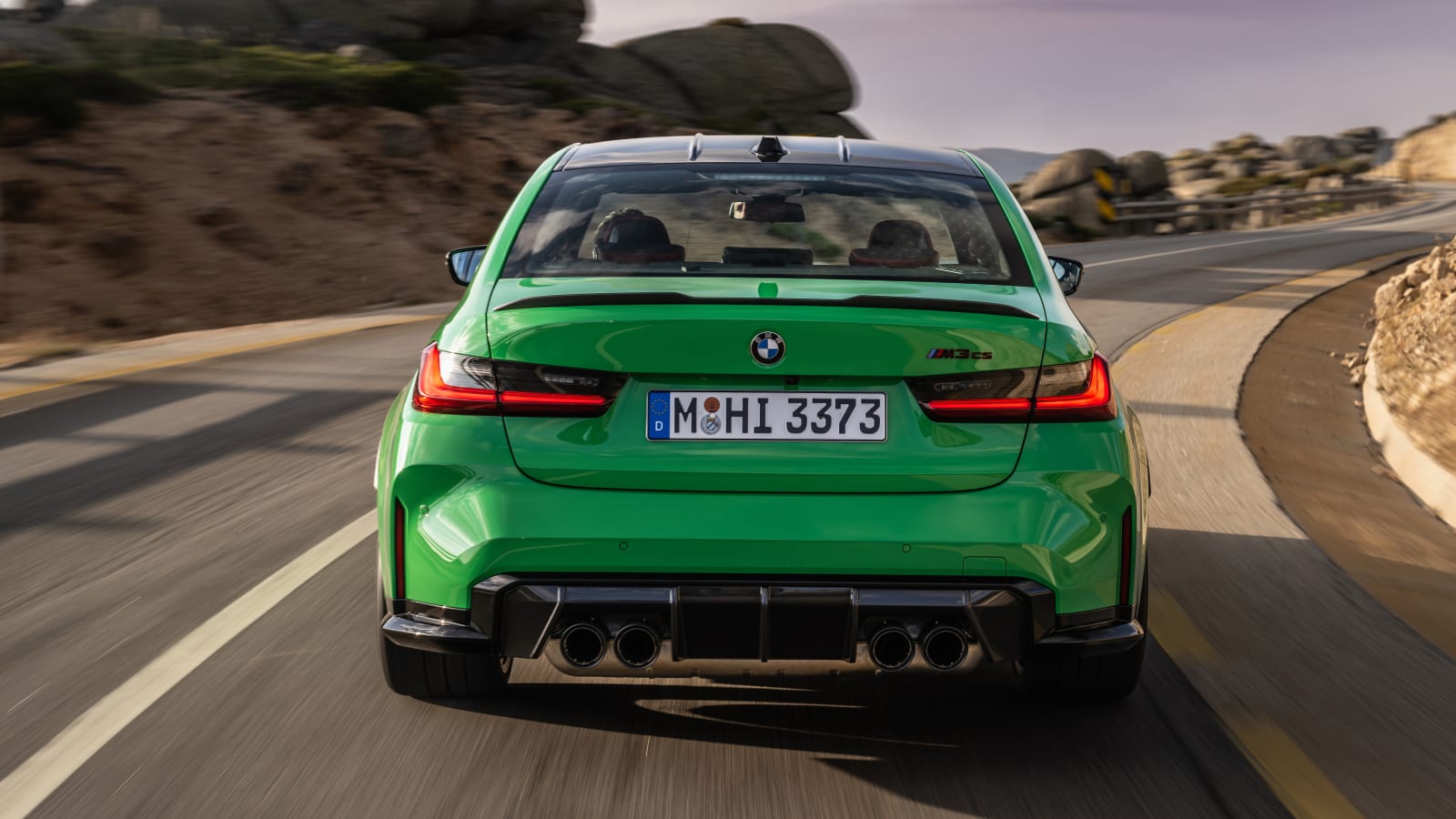 For those who want for rear-wheel drive, the CS’ AWD system can be put in a 2WD-only mode with stability control off. BMW also says it’s optimized the multi-plate clutch’s oil supply to keep the system performing at its peak under hard track driving. Tough luck to anybody wishing for a manual transmission.

The chassis gets some choice upgrades for improved handling performance. BMW says it has specially tuned the electronically controlled dampers and anti-roll bars for the CS model. Plus, it features unique wheel camber settings and model-specific axle kinematics tuning. The steering is uniquely tuned for the CS, and the calibrations for the stability control and AWD system are, too. Michelin Pilot Sport Cup2 tires can be fitted as a no-cost option, but conventional (unspecified for now) high-performance tires are available as a standard setup. The tires wrap standard forged wheels — 19-inch in front and 20-inch in rear — finished in either Gold Bronze or matte black. M Carbon ceramic brakes are available, but the M3 Competition xDrive’s standard brakes are fitted otherwise.

BMW makes sure you know it’s a CS on the outside with a unique kidney grille like the one seen on the M4 CSL. This grille features an “M3 CS” badge on the upper bars and brings red contour lines as a frame of sorts around the outside of it. The daytime running lights illuminate in yellow as a nod to motorsports instead of the usual white light, just like the M5 CS. Exposed carbon fiber reinforced plastic (CFRP) is used for the hood (two strips visible), roof, front splitter, front air intakes, mirror caps, rear apron and rear spoiler. 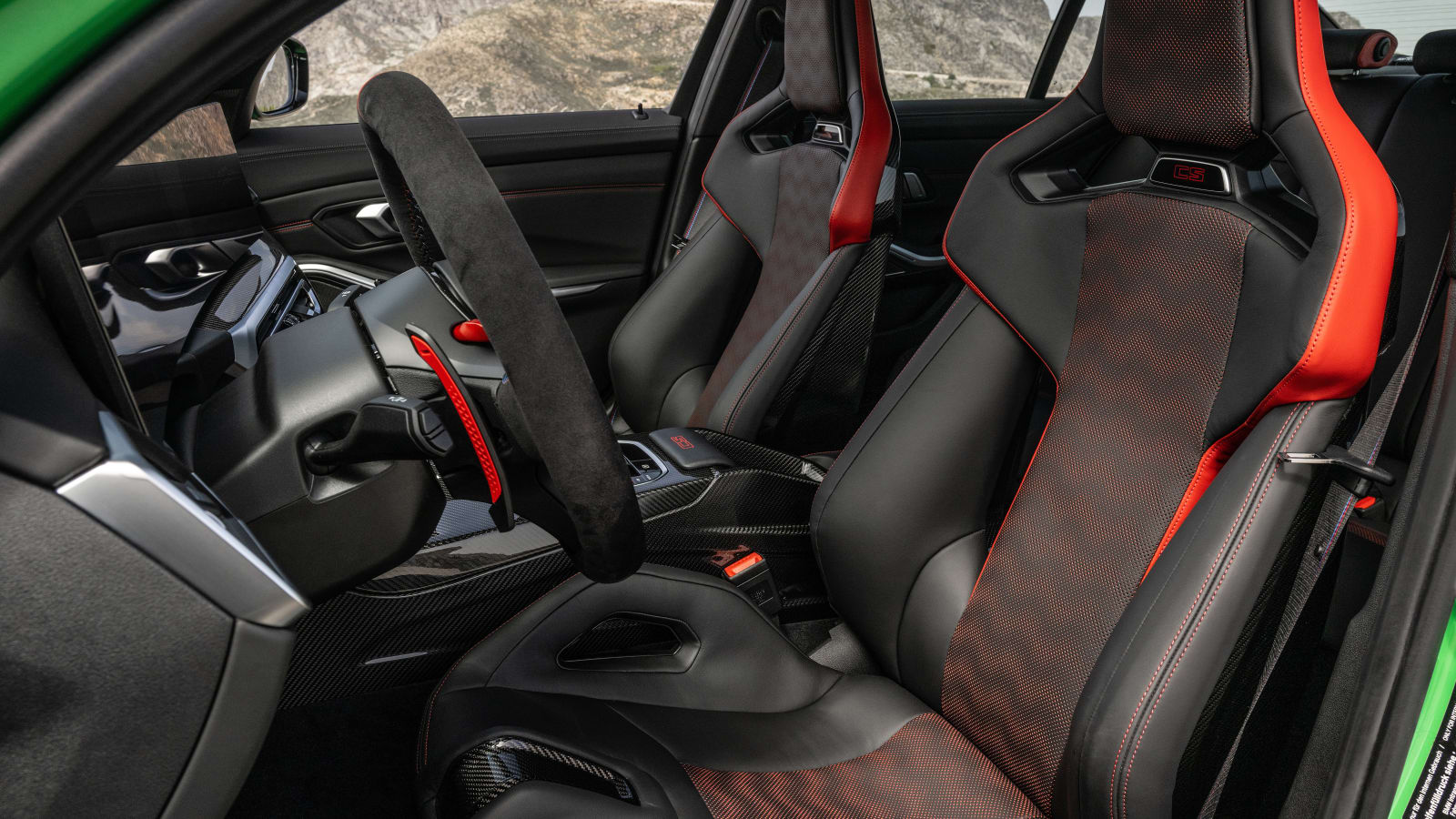 Shaving weight is part of what makes a CS product what it is. In addition to the exterior bits, BMW outfits the CS with its M Carbon bucket seats as standard equipment. Plus, a titanium muffler is fitted instead of the standard exhaust system. In total, BMW says the M3 CS is 75 pounds lighter than a standard M3 Competition with xDrive, and that’s before you take into account additional potential savings from optioning the carbon ceramic brakes.

The reveal color you see in the photos here is an optional add-on called BMW Individual Signal Green. Frozen White metallic is the one M3 CS-exclusive color on offer, and the two no-cost paint options are Black Sapphire metallic and Brooklyn Grey metallic. 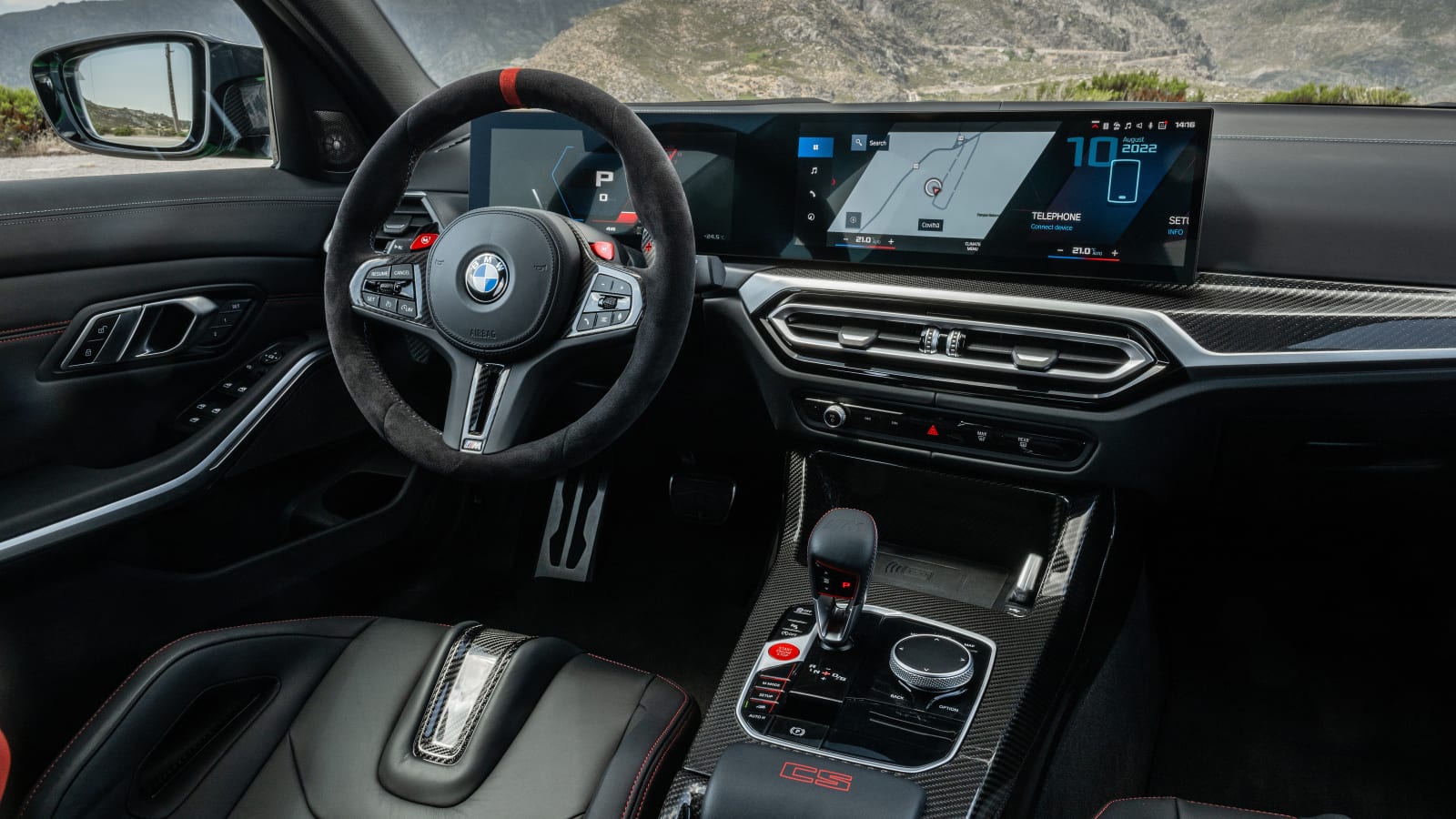 On the inside, BMW offers a single black Merino leather upholstery option for the seats. It’s accented with Mugello red bits and stitching scattered about. A red “CS” logo is placed on the center console, and the door sill plates say “M3 CS,” too. The M steering wheel is wrapped in Alcantara and features a red center marker. Carbon fiber paddle shifter are affixed to it, and the interior’s trim continues the carbon fiber theme. Every M3 CS comes with the M Drive Professional package as standard equipment — this adds the M Drift Analyzer, laptiming functionality and the 10-stage traction control system. Lastly, the M3 Cs features the regular 3 Series’ new 14.9-inch Curved Display and redesigned center stack. It’ll be running the revamped iDrive 8 infotainment system that the 2023 M3 adds to the roster.

BMW says the M3 CS will be “built in limited numbers,” but does not specify how many will be produced in total. If you want one, it starts at $119,695, including the destination charge. Compared to a base M3 Competition xDrive, that’s an extra $36,100. Production begins in March this year.

Elon Musk’s third day of testimony: ‘I had no ill motive’ in Tesla buyout tweet

Elon Musk’s third day of testimony: ‘I had no ill motive’...

Celica - January 24, 2023 0
SAN FRANCISCO — Elon Musk returned to the stand for a third day Tuesday in a class-action lawsuit brought by Tesla investors who...